While the Bog is a high-quality natural area, it continues to feel the threat of aggressive invasive plants.  One in particular, glossy buckthorn, is a major threat to the integrity of many of the Bog’s communities.  Unlike Common Buckthorn, which is a problem in upland plant communities, Glossy buckthorn is primarily an aggressive and damaging invader of wetlands like the Bog. Glossy Buckthorn is a tall, aggressive, and invasive shrub that has become extremely abundant in many parts and plant communities of the Bog.  This Eurasian shrub produces bird-dispersed seed in fleshy fruits and was first reported in Wisconsin in 1943.  Based on maximum stem ages found in studies here, it appears to have arrived in the Cedarburg Bog by about 1955. By the 1990s, Glossy buckthorn was most abundant in the southern portions of the Bog.  Its extreme abundance suggested that it will ultimately have a negative impact on other members of the shrub community, plants that grow under its shade including herbaceous species, and the recruitment of native tree seedlings.

Since 1991, the Wisconsin DNR, the UW-Milwaukee Field Station, and the Friends of Cedarburg Bog (FOCB) have been working on projects to control and manage both buckthorn species in parts of the Bog.  Since its founding in 2005, one of the primary stewardship activities of FOCB has been the control of buckthorn in representative examples of all of the Bog’s plant communities.   Over $312,000 has been raised to cut and kill fruiting-sized buckthorn in 576 acres of the Bog as of 2021.  The map shows all of the areas where fruiting buckthorn has been removed at least once. However, the work in these areas is not done.  Removal of the fruiting-sized shrubs has prevented new seed from falling, but continued control projects will be required as the seedlings of buckthorn that are present reach mature size and begin producing fruit.  The Friends of Cedarburg Bog is committed to protecting the important communities of the Bog. We will continue our efforts to raise funding and manage the removal of Glossy and Common Buckthorn within the Cedarburg Bog boundaries.

Below are links to various documents put together by researchers and FOCB regarding buckthorn control in the Cedarburg Bog: 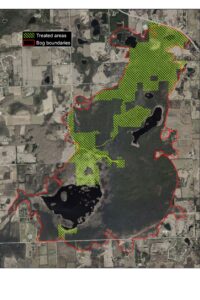 The Bog Guardian program began in 2017 with funding from the Ozaukee Washington Land trust and the WI DNR – Citizens Based Monitoring Program. A group of volunteers conducted road surveys to locate invasive plants in a 28 square mile area around the Cedarburg Bog. The Bog Guardians are currently focused on what we refer to as the Big-4, Wild Parsnip, Teasels, Phragmites, and Japanese Knotweed.  This map shows our 28mi2 Bog Guardian area and the initial 2017 mapping of the invasives.

Our focus is on these four invasive species because, 1) our volunteers have prevented them from ever really becoming established here, 2) they are very damaging in many parts of southeastern Wisconsin where they are abundant, and 3) they spread primarily along roadways.

Many roadsides surrounding our project area are dominated by one or more of the Big-4.  Where they are abundant on the roadsides, they have also invaded the fields and wetlands off the road, degrading everyplace they grow. These invasive plants reduce aesthetics, habitat value, and property values. The effort to prevent colonization through yearly surveillance and removal of initial colonizers is relatively cheap. Whereas eradication and control of invasive species that are well established is VERY EXPENSIVE.

The Cedarburg Bog neighborhood is exceptional because our roadsides, fields, and wetlands are still free from the Big-4. We have the opportunity to keep these plants (and others) from ever damaging our area. Roadsides like ours are becoming increasingly rare.  It would be a shame if we just let the Big-4 take over the roadways of the Bog Neighborhood, and they surely will if we just sit back and watch! We work with surrounding Landowners to help identify and eradicate invasives on their own properties.

2021 was the fourth season during which we surveyed, mapped, and killed every plant of the Big-4 within our 28 mi2  project area. The work to prevent all seed production of Wild Parsnip and Teasels was achieved with outstanding efforts of our volunteers. We would not have been able to achieve our goals without the support of our partners. The Ozaukee Washington Land Trust has applied herbicide to all of the known patches of Phragmites in the area. We have also received fantastic support from all the local highway departments and the electric transmission utilities in properly scheduled mowing of the biennial invasives to prevent seed production. These accomplishments mean that we have a fantastic start at keeping the Big-4 out of our area. 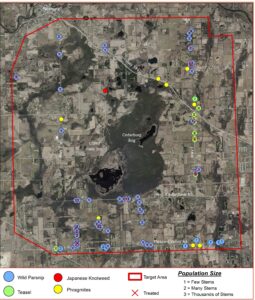 Becoming a Bog Guardian is easy and anyone can help!

We continue to look for volunteers to aide us in this effort. We also hope to keep engaging landowners and businesses to help us protect the beauty and the health of this precious Natural Area.

See All Galleries
© 2022 Friends of the Cedarburg Bog